Built in the early 1920s, the renovated Grand Hotel Principe di Piemonte, a member of Small Luxury Hotels of the World, is a grand and prestigious 5-star hotel facing Viareggio’s immaculate beachfront. Boasting a Michelin star restaurant, the hotel also has a spectacular rooftop, heated pool (during colder seasons), from which you can take in the stunning vistas of the Tyrrhenian Sea. 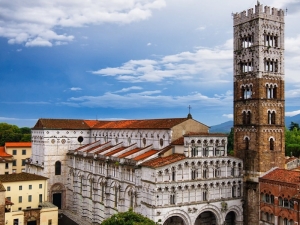 The cities of Lucca and Siena are splendid focal points to plan a two-center tour of Tuscany.

One of Italy’s most popular regions, Tuscany is a timeless masterpiece of rolling vineyards, winding roads lined by elegant cypress trees and iconic hilltop towns with rich cultural heritage. Take to the road and you will be rewarded with days filled with exciting sightseeing, hilltop panoramas that are breath taking and culinary extravaganzas washed down with the superlative wines of the region. Leave Florence for its own visit but rather make the cities of Lucca and Siena your focal points for northern and central Tuscany respectively. If arriving by air why not fly into Pisa and return home via Rome (2 hours 30 minutes from Siena).

Lucca, in the north west, is a Renaissance marvel, encircled by massive 16th century walls now used as a 4-mile elevated footpath. From soaring ancient towers to white-marble churches, Lucca combines some of the best aspects of Tuscany. For a panoramic view across the sea of the terracotta rooftops of the old city, you should climb the 200-plus steps that run up the Guinigi Tower. Bizarrely, oak trees crown this medieval lookout! Lovers of opera flock to nearby Torre del Lago for the annual Puccini festival, celebrating the music of Lucca’s most famous musical son.

Near Lucca lies Pisa with the famous leaning tower as well as the stylish beach town of Viareggio, renowned for its annual carnival and favoured by Italians for a summer break to the Mediterranean. Viareggio would make a good summer base for exploring Lucca and the surrounding area.

Surrounded by the rolling landscape of the central Tuscan winelands, the city of Siena occupies a strident, hilltop location that recalls its medieval heyday when Siena competed for power as an independent republic against Florence. Sadly, the might of its neighbour came to bear, and the city’s autonomy was absorbed into The Grand Duchy of Tuscany (Florence), unlike canny Lucca, which remained an independent state like Venice well into the 18th century. However, the architecture and traditions of this Renaissance city have been remarkably preserved including its beautiful cathedral, the colourful festival of the Palio and the imposition of an extended traffic free pedestrian zone in the heart of the medieval city centre.

The numerous hilltop towns surrounding Siena are all beautifully preserved jewels of art and architecture whether it be the sight of the 15 towers that dominate the skyline of San Gimignano (in medieval times there were 72) or the 14 turrets on the high walls surrounding Monteriggioni. For many, due to the prestige of its local grapevine cultivation, Montalcino is a particularly favoured destination and home to one of Italy’s finest wines, Brunello di Montalcino. Bango Vignoni is famous for its natural hot springs. The hot water flows in a shallow channel along the edge of town where you can sit and soak your aching feet, or you can have a proper bathe in the town’s famous spa.

…the wish list of “must sees” are too many to list here, but hopefully this brief overview will stimulate you to enjoy your own Tuscan two-centre journey of discovery.

Lying just 20 minuets from the centre of Siena, Belmond Castello di Casole is a 41-suite hotel in a large, private estate (once home to Italian filmmaker, (Visconti). There is an interesting mix of accommodation. Most suites stick closely to the stylistic parameters of the old castle, whether in the main building, the old priest’s quarters or the outlying farm buildings. Nine of them, though, the Oliveto Suites, are strikingly contemporary. The stunning hotel pool overlooks a vista of rolling hills with the castle behind. There us a rich array of activities available including truffle hunting, cookery classes, a sublime spa, or perhaps spend the day driving around the nearby villages and towns including San Gimignano and Monteriggioni in a vintage car. 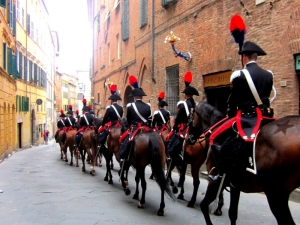