Check out this lovely write up from the Northamptonshire Telegraph…

Take an oil-palm cloning specialist and mix with an aerospace development engineer and what do you get? Probably not a Travel Agent.

But that’s what Hazel (the cloning wizard) and Chris (the spaceship composites engineer) decided to become, back in 1987. 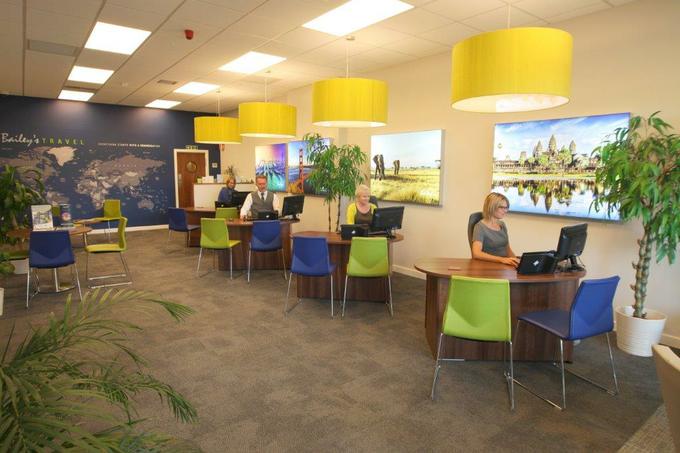 For both partners the unexpected journey started with problems at work. While it might sound like an out of this world job, Chris found the aerospace industry increasingly uninspiring, hampered by management and stifled by too many overlong meetings.

At the same time Hazel’s own position within Unilever’s palm tree cloning operation was becoming increasingly uninspiring. Both of them need a change – but what?

The couple decided to find a business where they could control their own destiny, and lacking business experience a franchise seemed the ideal way to start.

The choice was narrowed down to three viable options; an estate agency, a video rental shop and a travel agency. A quick look at the fading fortunes of estate agents saw the list cut to two.

Video rental looked like a licence to print money (this was the 80’s, remember), but the franchise company turned out to be fraudulent. Which left Exchange Travel, a country-wide network of high street agencies with nearly 100 years of trading behind it. What could possibly go wrong?

Just over a year later with offices in Rushden and Wellingborough trading successfully, Exchange Travel went into administration in their Centenary year and Chris and Hazel faced stark choice – fold the business or carry on as independents. With staff to support, leases to fulfil and life savings invested, the choice was made to continue. ABTA membership was arranged, the name above the door changed and life carried on.

In the years that followed their persistence to make a success of the business was sorely tested, as global travel was hit by the Gulf war, the second Gulf war, the SARS epidemic, the global recession and the rise of the internet.

Thirty years on, in fabulously refurbished premises in Wellingborough and Leighton Buzzard, Bailey’s Travel has not just survived but thrived, becoming one of the UK’s leading Independent Travel Agents.

At one point the business had four branches, but following a review five years ago, it was decided to consolidate on Wellingborough and Leighton Buzzard and close the two nearby offices in Bletchley and Rushden.

Ever-increasing booking levels since serve to suggest customers have been more than willing to go the extra mile for a travel agent that does the same for their clients.

Leighton Buzzard was invited to join a very select group of agencies when, in 2011, it became a partner store of Kuoni Travel, the best known name in long-haul travel in the UK. Voted partner store of the year since, this collaboration proved fruitful and the shared values of Kuoni and Bailey’s Travel make for a very compelling proposition.

Keen to maintain autonomy, Wellingborough has remained as an entirely stand-alone office, despite overtures from a number of suppliers – the memory of Exchange Travel is not too far from the surface, and independence, hard won, is not easily let go of.

After so many rough seas, the business is now in calm waters. The demise of the high street travel agent, for so long predicted, has not happened for those agents willing to move with the times.

Embracing change, Bailey’s Travel has kept abreast of technology, opens on Sundays in Wellingborough and embraces the Internet, using it as a tool to enhance the experience of a loyal and ever-expanding client base. Whether as a booking portal, an information source or a communication channel via the baileystravel.co.uk website.

And they understand that while the cheapest anything in the world can be found on the Internet, a trustworthy and reliable service is far harder to find in the online world.

The wrong holiday to the wrong place with the wrong people around you is a waste of your life. Time is something you never get back, so making informed decisions about your travel and holiday choices is crucial.

Travel is an ever-changing picture. Trends come and go. Destinations find favour one year and then sometimes fade away for all sorts of reasons. Holiday companies number thousands, but some agencies, particularly those owned by the big vertically-integrated tour operators, choose to offer only their in-house products and a very restricted menu of third-party choices.

Bailey’s Travel, along with every other independent agent of any standing, has the widest range of bonded products that you will find anywhere. Whether it’s a weekend away, a few days to the seaside, a holiday to the Mediterranean with the family, a honeymoon in the Caribbean or a retirement trip around the world, Bailey’s Travel can do it all.

They take the time to explore as many possibilities as required to find the optimum solution to your requirements. It might be long-winded at times, but if you want to make the most of your holiday time, it’s worth taking a bit of time to get it right. In return, Bailey’s Travel, as they have done for three decades, will put in the effort so you don’t have to. And in the event that things go wrong, and they occasionally do, we’re here to sort it out.

Not for nothing does it say “Everything starts with a conversation” above the door, on the wall inside and on every piece of company literature, even extending to the complimentary beach bag that is given to every customer to carry away their brochures and documentation.