Themed walking tours in the heart of London

We have teamed up with Leighton Buzzard based ‘Battlefield Journey’ to offer a range of London based walking tours.

These tours range from 1 1/2 to 3 hours and give you an authentic taste of the subject that’ll make you look very differently at the streets of our capital.

During the Middle Ages this area was outside the boundaries of London, made up of fields and farmland. Hard to believe today.

Like so many parts of London, Soho has been through numerous changes over the years. From royal hunting ground in the 16th century to a fashionable address for the aristocracy in the 17th century. By the 19th century Soho had become one of the most densely populated and shabby districts of London. Home to refugees from France, Italy, Greece, Switzerland and Ireland, all of whom left their distinctive mark on the character of the area.

If the City of London was where business was conducted, by the mid-20th century Soho was where visitors could experience ‘entertainments’ in a variety of forms.

Although still vibrant and bustling today, Soho is changing rapidly but is no less fascinating. Our walk takes us past pubs, clubs, bars and former strip joints that have left their mark on the world we live in today.

Starting at Tottenham Court Station and finishing in Chinatown this walk is a reminder that “The web of our life is of a mingled yarn, good and ill together.”

The ‘Square Mile’, in the 14th Century home to 80,000 people, today to less than 8,000 From the Romans to medieval London, our walk takes us on into the 20th Century to uncover a world of firewatchers, ARP wardens and auxiliary firefighters.

The City of London was a prime target for the Luftwaffe and our walk will tell a story of bravery and courage in the face of, at times, overwhelming odds. But of course there is much more to see and tell!

On our walk we will discover the sites the Romans chose for both the forum and the amphitheatre , uncover the Jewish quarter established in the time of William the Conqueror and encounter the site of a 17th century plague pit.

We will tell the story of the first Bluecoats School, Old Tom the goose and the ghostly tales of Sarah Whitehead and Queen Isabella.

As you would expect personalities abound – the famous like Pepys and Dickens, and the less well known like William Jenkins, at 6 feet, 7 inches buried beneath the Bank of England to prevent body snatchers making off with him!

At the weekends nowadays, the City is quiet and uncongested, making this ideal for walkers of all abilities.

From the Tower of London to Canary Wharf

Walking a part of London rarely visited by tourists we tell the compelling and fascinating story of the development of the London docks. By the 19th century London had become the most important trading city in the world.

Everything imaginable was imported spices, tea, furs, carpets and the storage facilities were vast. There was enough rum stored to make the entire country drunk, enough indigo to dye the Thames blue and a store big enough to house 250,000 mutton carcasses at any one time.

But there is more to this walk than the story of trade. Discover a darker side of London life. A life where pirates and crooks abound and where the law showed no mercy to those caught in the act. We visit the site of Execution Dock, tell the story of the very first police force in London and reveal the fate that befell those found guilty of piracy.

If this area fascinates us today, it was no less so to writers and painters in the past. Charles Dickens, William Hogarth and JMW Turner were frequent visitors. In fact Turner was said to have owned a pub, the Old Star in this area.

Sticking to the riverside path this walk runs from the familiar splendour of St Pauls to the less familiar waterfront at Wapping. As we revisit the haunts of the press gangs, pirates and their pursuers we pass pubs such as the Town of Ramsgate, the Grapes and the Prospect of Whitby, which have changed little in the intervening years.

Much of this walk is along the Thames Path and so for large sections we are well away from the noise and bustle of the traffic. 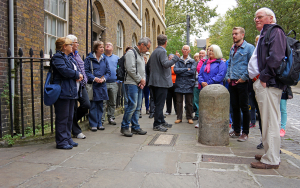 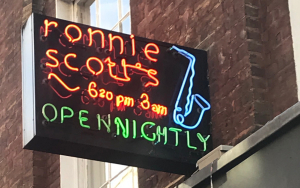